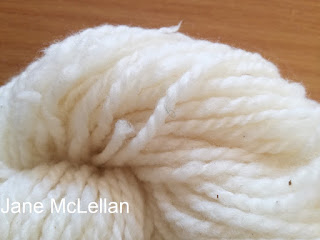 I need some yellow wool for an upcoming project. I thought instead of spinning more wool, I'd look for a skein I knew was lurking in my kist or trunk. Hmmm. I found it alright, but it looks as though someone has snipped many of the threads with a pair of scissors. I soon found the culprit: 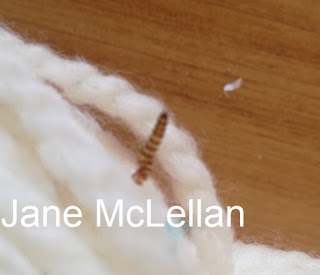 I don't know what his name is, nor what to do about him, but he has plagued me for years. It's not the greatest photo, he has three little hairs on one end which don't show here. There are moth balls in the kist, so that's not the answer. Any other suggestions welcome. I will have to spin some more wool and throw this skein away.
Posted by Jane McLellan at 12:33 AM