This wonderful thread is Little Boy Blue from Tat-ilicious. When you make a split ring braid with a multicolour thread, the early rings have the same colours on each side, but the colours gradually 'slip' in relation to each other. That's because the thread inside the ring comes from one side. It's not necessarily a problem, but I don't like the way it emphasises the split nature of the rings.   If the split rings are symmetrical, I can avoid this by turning the braid over and starting the rings with alternate shuttles. But in this case, the long picot on one side exaggerated the problem. I solved it by doing the shoe lace trick. Not after every ring, just when the colours were beginning to get too far apart. 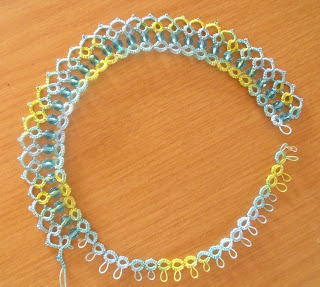 So at the end of the braid, I still have the same colours on each side of the split rings. Voila.
Posted by Jane McLellan at 11:11 PM