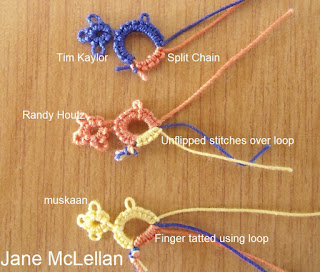 It's always good to have options. Recently I've learnt several ways to make split self-closing mock rings. Tim Kaylor tats a split chain for the second part of the ring. There's a link to his video on this post.  Randy Houtz's method is described on muskaan's post here.  This method requires three threads rather than Tim's two. Muskaan's method also needs three threads, the loop is used to finger tat the second half of the ring. Muskaan used it to tat a spectacular bracelet.

I think it might depend on the circumstances which method would work best. If you were tatting a doily in two colours, Tim's method might be best. I used Randy's method for the leaf braid with flowers , where I wanted the third thread for the flowers. For muskaan's wave braid, with three colours showing, her method is best.

Posted by Jane McLellan at 1:09 AM