Start At The Very Beginning

'The Tatted Artistry of Teiko Fujito' has been calling to me ever since it arrived in February. I paged through it yesterday and wondered where to begin. The beginning, of course, just as the song says. I'm going to work my way through the book. The motifs are numbered; I shall follow the numbers.
The book is structured so that it begins with one shuttle patterns and then progresses to two shuttles and then three. There's not a lot of text, it relies mostly on diagrams: 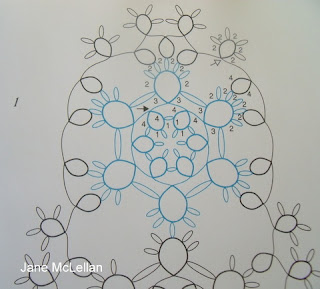 It's one of those motifs that looks simple but isn't easy to get right. 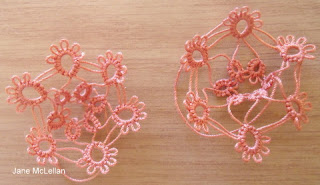 The little motif on the left is my first attempt. It cups, as you can see. I didn't think carefully enough about what changes were required in order for it to lie flat, so my second attempt is considerably worse! The third one was good enough for me to continue. Getting the picot lengths and bare thread spaces correct is key. That's true for many of the patterns in the book, so I'm hoping that by starting at the first motif, I will gain the experience I need to do the more complicated designs later.
Posted by Jane McLellan at 2:10 AM