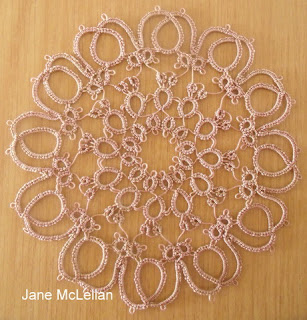 Motif 11 is a little daunting because the rings in the outer row are so large -  37 ds. I had some thread left on the shuttle after the second round, so I did some experimenting. I tatted a normal ring, self closing mock ring and two mock rings joined to an inward picot at the start. Two of the true mock rings because even though it's the best option, you have to be careful to snug the ds up as you go, not wait until the end of the chain before pushing them along. I think the experimenting paid off, I was more confident by the time I tackled the outer round. Here's a photo of the start of a mock ring, with a safetypin holding the inward picot open: 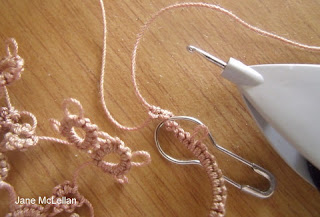 I used the shoelace trick to change the direction of the chain before starting the mock ring. The chains themselves are long too, and there again it's important to snug the stitches up as you go.
Posted by Jane McLellan at 12:25 AM