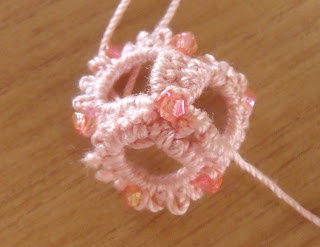 Thanks to LadyTats, I can give you a link to the tutorial I'm using to tat a cube. Faces one and two were relatively straightforward. But for the third face, you need to finger tat the fourth edge, as a Single shuttle split ring, to make sure that the thread is in the right place for the next face. Hmmm. I struggled with that. I gave it some thought as we drove to town and managed it when I got home again. The neat thing is that when you close the SSSR, you use the bead as an anchor to prevent it from disintegrating. Clever. Face four is the same as face three, so that was no problem. But face five requires finger tatting on two edges. My first attempt is a mess. I hope I can remove it without damaging the first four rings. I was making very slow progress when I kept starting from scratch each time I made a mistake!
Posted by Jane McLellan at 10:41 PM