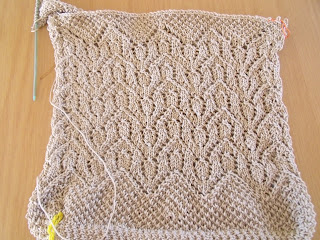 This is the pattern for which I originally went looking for cotton yarn. I was a bit distracted by bright pinks and purples, but I went back to it eventually. It's also the pattern for which I practised brioche stitch. The pattern is 'Chevron Market Bag' by Kristen TenDyke. I downloaded it as a free download from Interweave Press, though it originally appeared in Interweave Knits magazine Spring 2010. I still have to finish the strap and make an i-cord for fastening, but I'm nearly there.

I'm going away for a few days - not to Tat Days, unfortunately! Much closer to home. 1st September is officially the first day of spring in South Africa, I hope the weather will be spring-like. We had frost yesterday morning and this morning, winter is reluctant to leave.
Posted by Jane McLellan at 1:13 AM