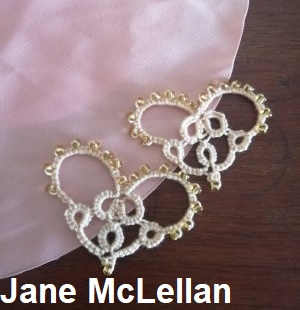 I'm a big fan of the Endrucks project. I think it's wonderful that many people around the world are collaborating to modernise and publicise the work of a designer who worked a century ago.  Muskaan and Ninetta have put in a tremendous amount of work. I'm not participating in the project, mostly because I'm busy with a number of other things at the moment, but also because the Endrucks style doesn't really float my boat. But to show my appreciation of the project, I thought I'd participate in muskaan's pretty me heart fun.

The timing is good because I was thinking of tatting something small for the next project for the craft group I run. My plan is for us to make milk jug covers. I made some elaborate ones in 2013, and these. The group will do something much easier, but I thought that a bit of tatting on my sample wouldn't go amiss. I've added beads to the hearts to pretty them up and to add weight to the edge of the milk jug cover to keep it in place. I'll be making at least two more before putting it all together.

Posted by Jane McLellan at 2:20 AM