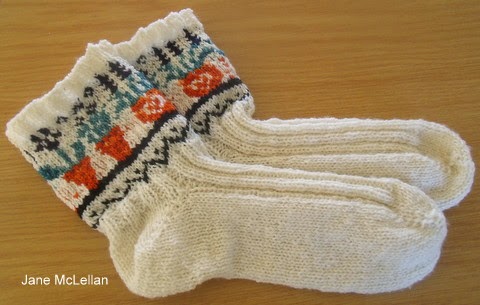 I'm glad to have learnt to knit two socks at once on  two circular needles. I think my needles are unnecessarily long. The long, springy cables meant I felt as though I were wrestling them at times. It would probably be easier with shorter cables.

I'm not a chronic sufferer of Second Sock Syndrome, but I must say it was great to be finished all at once. On the other hand, if you got something wrong, you'd have to undo two lots.

I think the circulars worked pretty well for the fairisle. To start with, there are only two 'junctions' instead of three or four, and I think they turned out fairly smoothly. That alone would be an argument for using this method.

The Turkish cast on method works really well with this method. Much easier than starting with waste yarn and then grafting, which is what I've done previously for toe up socks.

I can't swear I'll knit every pair of socks like this in future, but it is a good method of sock knitting to know about.

Posted by Jane McLellan at 1:29 AM