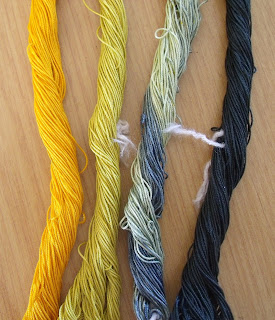 I've had my dye pot out again. The blue dye I used is called Midnight Blue and has a touch of red in it. That's why the pale greens are rather olive or khaki. I did the multicolour skein and then poured the dye that was left into my coffee tin dye pot. I was pleased with the very dark green that emerged. The thread is Cebelia 20. 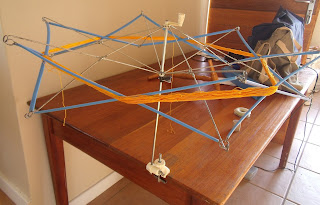 Since there were four skeins to unravel, I dug my swift or skein holder out. If I'm winding just one skein, I often don't bother, just hold the skein round my knees. 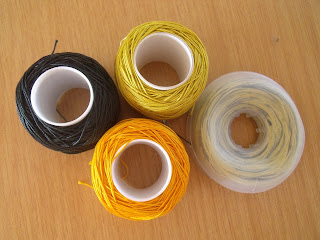 Jess kindly sent me some ezybobs. Very handy. Otherwise I use the centre cores from the original thread. I've found that winding the thread diagonally works better than straight around the core. I do have a ball winder which works wonderfully for knitting yarns, but I find that thread balls tend to collapse if I wind them on there.