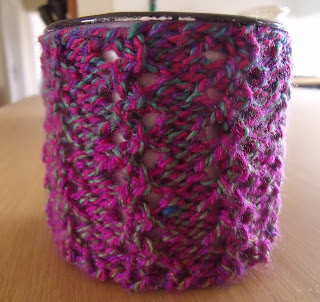 I wrote about the cup covers I was asked to knit for a market stall. I was rather puzzled and sceptical that they would sell. But apparently they  sold well to teenage girls who plan to drink coffee out of them. I've been asked to knit more 'koppie rokkies'. That translates literally as 'small dresses for cups', but of course it sounds better in Afrikaans than it does in English.

The other day I knew I'd be spending some time in a government office, so I took my knitting with me. As I cast on I thought, 'Uh-oh, someone is going to ask me what I'm knitting'. I could just imagine the puzzled look if I said a cover for a tin cup. So when I was duly asked what I was knitting, I fibbed and said it was a square for a blanket! Discretion was the better part of valour.
Posted by Jane McLellan at 3:09 AM