Well, I sold a couple of items at the market on Saturday, enough to cover costs, if not make my fortune. I think that once again there were more sellers than buyers, a sign of the times, but the venue was pretty, the weather pleasant and I enjoyed the day.

I'm now working on round 9 of the Spring doily. 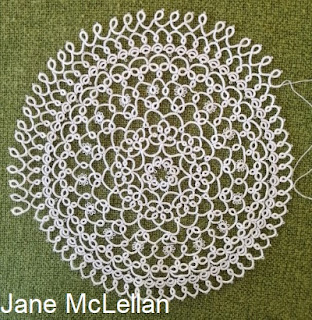 This is a 'suspended' round, clearly waiting to be joined to the next one.

At 12-12 the rings are too big for me to use my usual method of avoiding enlarging the ring by removing fingers! Instead I'm working half the ring in that way, then letting the shuttle dangle and increasing the thread around the hand before doing the second half. That way I only have to pull thread once.

I had some thread left on the shuttle from round 8. Rather than unwind it, I used the 'false CTM' method - I tied the shuttle to the ball and then wound some more thread onto the shuttle so that the knot would be further along and I wouldn't have 4 threads at the beginning/end of the round.

I promise to measure the doily when this round is complete. Picotsnkeys asked me how big it was after round 8, but I didn't answer her.

Posted by Jane McLellan at 2:27 AM