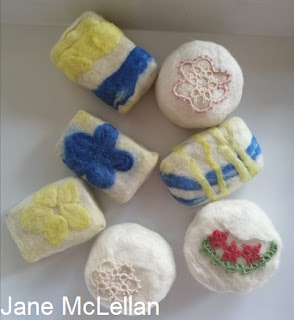 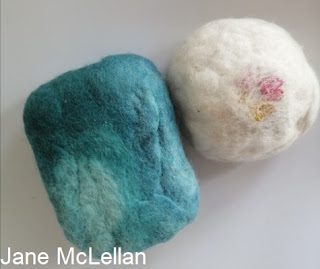 A friend of mine makes soap, so when I saw this tutorial for making felted soap, I asked Sarah if she had any 'ugly' soaps that would benefit from being covered in felt. She gave me two for me and seven to give back to her.
I started with the jade one in the bottom photo.  I thought I'd dye it after I'd felted it. That worked ok, but I'm a bit worried that the dye might not be fast enough - Sarah said we could call it a Smurf soap! The felting is not as smooth as it might be, but that'll need practice. For the second one, I added a bit of tatting, instead of using dyed wool. I covered the tatting with a thin layer of wool, but that obscures the motif and I decided it probably wasn't necessary.
Yesterday I dyed small amounts of blue and yellow wool before felting.  I'm pretty sure the dye is properly fixed.  I did the oblong ones with different colours of wool and added tatting to the round ones without covering them. It worked pretty well, I think, though it would take some practice to get them looking really good.
Posted by Jane McLellan at 1:29 AM