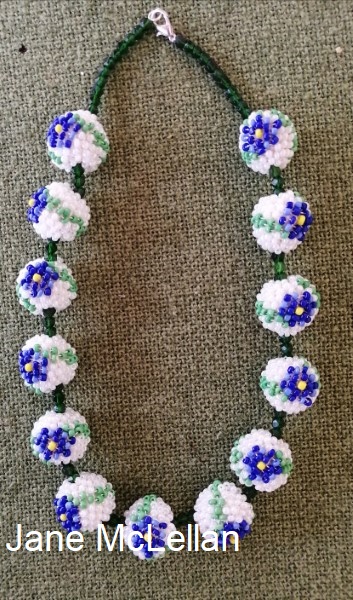 Phew, putting the necklace together was trickier than I had anticipated. At one point I considered putting the beads into a bowl to be admired and forgetting the necklace altogether! These beaded beads are heavier than my candy cane ones,  The white 'pearl' beads must be heavier than the ones I usually use. I threaded the flower beads onto the same size 40 thread that I used to crochet the beads, but it didn't feel secure. I left the thread in place and added a thread of nylon beading thread. It's like invisible thread - I felt as though I were making the emperor's clothes. I did a stitch through the felt of each bead, but it doesn't prevent the beads from swiveling. So be it. The necklace does feel stronger and more substantial with the two threads holding it together. I threaded both threads through the clasp, took them back through the green beads at the ends and then secured them in the felt of the first and last beaded beads.
Posted by Jane McLellan at 1:12 AM