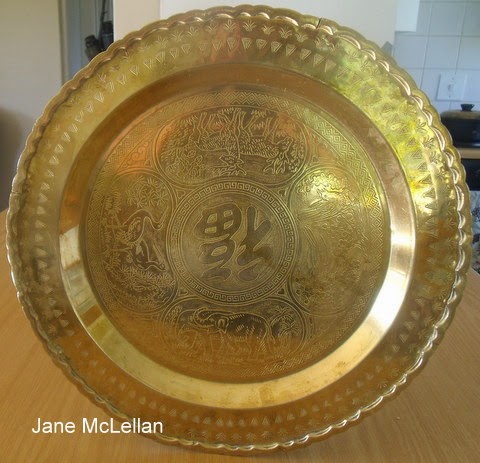 I went yesterday to the area conference of the organisation I belong to - Vroue-Landbouvereniging van Kaapland, abbreviated to VLV-K. For the second year, tatting was the craft for the floating section. Last year I was the only entrant at the area level, but this year I was joined by Linda, who has been coming to me for lessons. Click here to see my doily and here to see Linda's.  No surprise really that I came first and she came second, but I was really glad to have a fellow competitor! Both doilies will go forward to the National competition later in the year.

For those who followed my dilemma about whether to enter the traditional doily or the modern Under An African Sky one,  I talked to the judge yesterday and we agreed that I would send both of them forward to the national competition. So that even if the judges there don't approve, it will be seen.

I like the details on the tray, but I must say it mixes its metaphors. There's a Greek key pattern around an Eastern looking symbol; elephants on one side and deer on the other, which are never seen in the same place in nature.... I'm not sure if they're supposed to have significance or the maker just put in whatever he fancied.

Oh, and my Frost flowers top came second in the knitting section. No trophy, but it will go forward to the national competition.