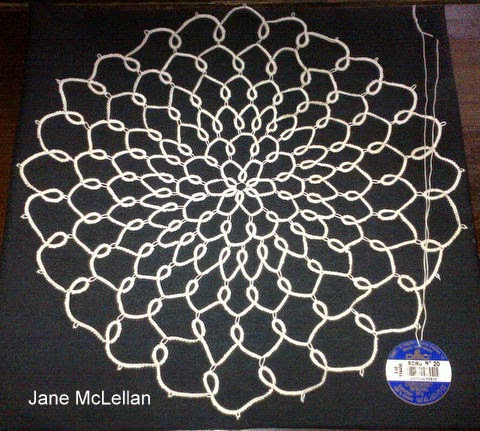 Linda has moved house and is really too far from me now to come for tatting lessons. But she is doing well on her own and has submitted her doily for the competition. This pattern is from the Burda magazine that Tally Tatty sent me, minus the outer row. Linda was battling with the outer row and running out of time. Since it was already big enough to conform with the specifications, I advised her to submit it as it is. It's pretty already and it wasn't practical to finish the outer row in the time left.

I submitted my traditional doily for the local level competition, but not the Under an African Sky doily. I'll see if I can get the latter exhibited as an example of modern tatting at the national competition later in the year, though quite how I'll achieve that I don't know.
Posted by Jane McLellan at 1:37 AM