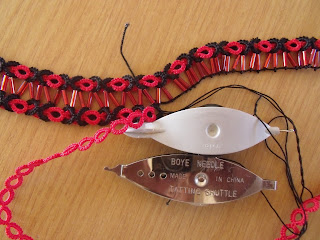 I have to keep my wits about me as I tat the final split ring row of this choker. I added the bugle beads to the long picots of the top row before I started, holding them in place with a thread. I have to join two beaded picots to each split ring of this row, and remember to weave the red foundation row through the ring before closing it. I do get into a rhythm after a while, which helps.

The pattern link is on the right of the page, Choker pattern. I think the pattern could be improved, perhaps some photos of work in progress added. I must finish working on five necklaces for an order (this is number 3) and then I'll have a go at that.

I'm going to have to change my comment settings so that Anonymous can't comment. I'm reluctant to do that because I do get genuine comments under 'Anonymous', but I'm being swamped by spam. I had hoped that limiting the comments while I was on holiday might discourage the spammers, but it's getting worse and worse. I had better act! Apologies to those who will no longer be able to make genuine comments.
Posted by Jane McLellan at 11:59 PM