I was thinking of starting another curds and whey to carry about as 'handbag tatting'. But when I saw this edging yesterday on The Knotting Nurse's blog, I thought I'd do that instead. Sharon has given the pattern in needle tatting terms, which is not a problem of course, I just have to ignore instructions like 'turn and tie off'! I took on board Sharon's tip that a lock join is not the best join to use. Instead, I swap shuttles before making the join, which amounts to the same thing as Sharon did. I use a safety pin to create a space to join the next ring to: 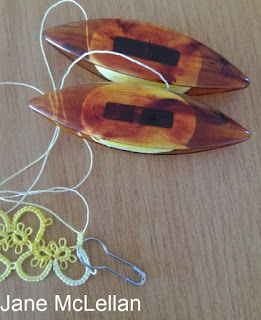 I'm using a size 40 thread, Coats, in a variegated yellow. I think the variations in the thread are subtle enough for the two shuttle method to work.
Posted by Jane McLellan at 1:29 AM