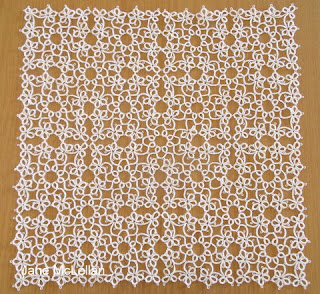 I set out to make a magic square that was bigger than Robin Perfetti's diagram.  On my first attempt, I turned right when I should've turned left and finished up with a square that was exactly the same as the diagram. Nice, but no cigar. I decided to have another go, and this time I got it right. This is tatted in one pass so that there are only two threads at the end to sew in: 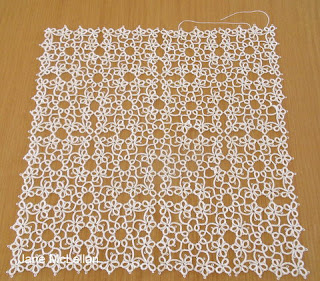 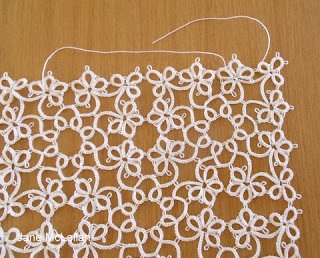 Of course there were ends when I refilled shuttles as I went along, but those ends could be encapsulated.

There were several times while tatting this that I was convinced I had gone completely astray. I hadn't. Eventually I found that the best way of working was to keep my eyes firmly on the diagram, rather than the work itself. Do not stop periodically to admire your progress, Jane, that causes confusion!

One interesting point about the diagram is that is was computer-generated. Robin hasn't tatted the whole diagram herself. I'm here to say that it works like a charm. Thanks Robin.

I used size 40 thread to tat this, it measures almost 30 cm across.
Posted by Jane McLellan at 2:33 AM