Round 6 and Emperor Moth Caterpillar 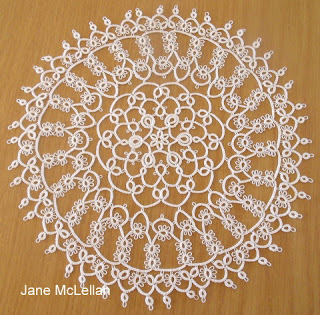 I've done round 6  of the Renulek doily.

I sent the photos of the very large caterpillar to Steve Ogden from Wildlife Insights . He replied very promptly and said he thinks our caterpillar might be an Emperor Moth caterpillar. He also thinks that the druiwewurm on my neighbours' grapevines might be a Hawkmoth (hats off to you Diane!) The Emperor one feeds on acacia, which is where Jack found this one, whereas the Hawkmoth feeds on vines.  We left the caterpillar on the acacia tree, but we'll see if we can find it once it pupates and put in in a box so that we can see what it turns into. We won't hold our breaths though; apparently it will take a long time and may not happen at all.
Posted by Jane McLellan at 1:10 AM