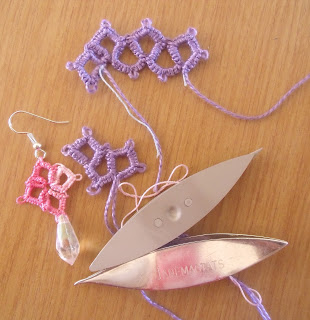 Square rings? It's a rather odd technique, where you tat a ring using two shuttles at once, except where the picots are. Close the ring and then tug on the 'inside' ring and it turns into a square. It works with chains, too. There's a video on Karen Cabrera's blog and written instructions on Dreams of Lace by Christine Eichler.

I have two shuttles that are easy to hold together. The problem I have is that the two threads twist around each other on each stitch. I have to unravel them at each picot point, where I'm going to tat with just one shuttle. Can anyone give me any clues how to avoid that twisting?

I didn't make a second earring. I need more practice before I try to create something useful.
Posted by Jane McLellan at 2:20 AM