Evolution of a lily pad 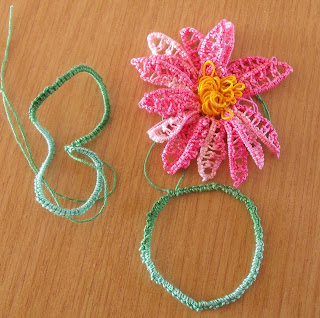 Blue organza alone won't be enough to suggest that my dragonflies are near water, I must have a waterlily. And lily pads. My attempts to make a 'solid' leaf using inverted tatting didn't work. So I thought of just tatting a big ring. Well, a very big ring is difficult to close and looked a mess. A mock ring that is really a chain? It worked better, but as you can see in the picture, it's still a bit curly. Yesterday I watched Karen Cabrera's  video about the double double stitch, where she says that it's good for making long chains that don't twist. So here's a leaf in double double stitch. Not only is it less twisty, but it's bolder, which may work better on an organza food cover.

Carollyn has also been tatting a waterlily, as you can see here. Her waterlily has clunies for petals, and josephine knots for the centre. I made a ring using layered picots for the middle and inverted tatting for the petals. Tatting is versatile!
Posted by Jane McLellan at 1:02 AM