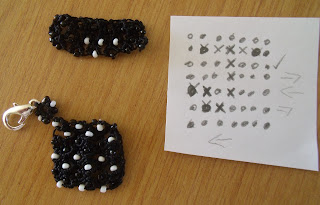 My idea was to create a beaded monogram. I made a pattern and set off. But I'd forgotten that the rows of beads are staggered. It won't work as I envisioned. An abstract pattern using different coloured beads is easy enough though. The other thing I got wrong was the order that the beads should be threaded. I was thinking that the beads had to be threaded in reverse order. Not so, but far otherwise. Because the beads go forward, as it were, onto the thread, backward onto the shuttle and then forward off the shuttle, they must be threaded in the same order they'll be tatted. 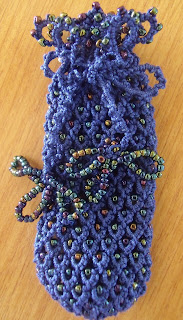 I have finished the shuttle bag. Thanks to Marie Smith and Frivole for the pattern. Later this week I should have a special shuttle to go in it.
Posted by Jane McLellan at 12:43 AM