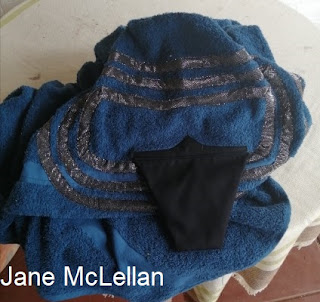 The lady who ordered the Kylo Ren towel came on Thursday afternoon and explained that she wanted the lines to be wavy, not straight, and didn't like the silver triangles on my original version. Right. I spent much of Saturday working on the second version. The wavy lines had to be sewn down by hand before I could sew them with the sewing machine. A power cut put an end to my endeavours, but I finished early on Sunday and sent off a picture. Whatsapp says it has been seen, but I've had no response, so I assume the lady is still not happy with it. Enough now. I've spent way too much time and energy on it already. It's a child's swimming towel, not the Mona Lisa.

Here's what someone else said about commissions: "[My wife] is not generally too happy about them because non makers form a picture in their mind of the finished product, which is often literally impossible to make, and in any case poorly communicated, but any deviation from that is in their eyes defective".