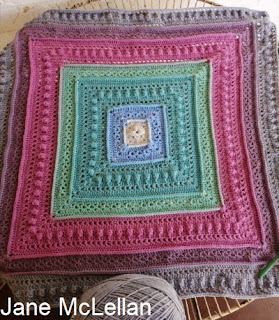 When I've finished with grey, I'll go back to cream. I considered changing the order of the colours in the next repeat, but I like this colour progression, so I think I'll stick with it. The label on the yarn says they're 'pullskeins' which I assume means you're supposed to work from the middle of the ball. I found the middle end on the cream, but not on the others. I didn't try all that hard because I've found that when the middle of a ball is hollowed out, the ball tends to collapse and get in a muddle. I'm sure that's especially true of such large balls. So I think it might be better to just work from with outside end.

Posted by Jane McLellan at 1:54 AM