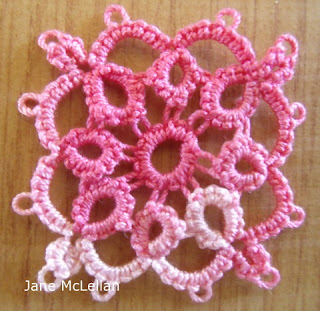 Many of you will have already heard of Cathy de Greef's project to create a huge tatted piece in Brussels, using tatted squares made by tatters around the world. Here's a link to her page that explains the project. I think it's an interesting idea, I'd like to be part of it. Cathy has a pattern for a square on her page. I tried it using Ninetta's tip in this post, I tried it starting with a ring as muskaan showed in this post.  My results were less than satisfactory - my squares do not lie flat! 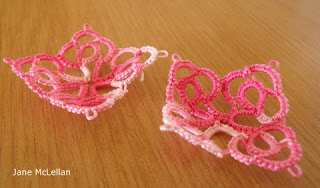 I should fiddle with tension and picot length until I get it right.  I may still do that. But since the brief says other patterns will be accepted as long as they measure 3 cm square, I thought I'd look at alternatives. The thread on Craftree about the project had two alternative patterns. One of them is pretty but a bit fiddly for mass production. This is the other one: 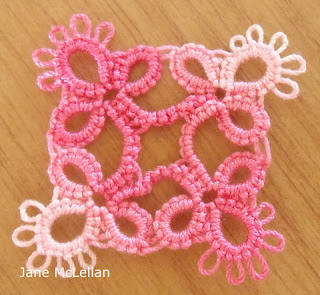 It lies flat and has the right measurements, hooray. I had a look at Jane Eborall's square motif. It's too big, but gave me the basis to create a smaller square that has the correct measurement. Aha. Here's a photo with the stitch count: 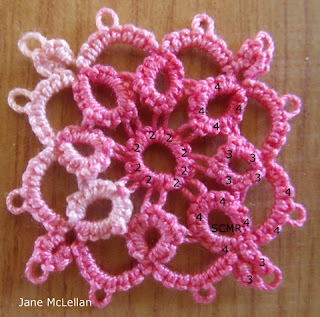 I've created a pdf version, there's a link on the right hand side bar and here it is again. Always good to have alternatives, don't you think?
Posted by Jane McLellan at 10:11 PM