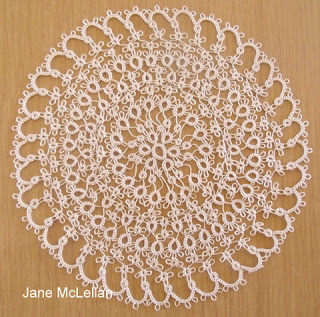 Here it is, the last pattern in the book. 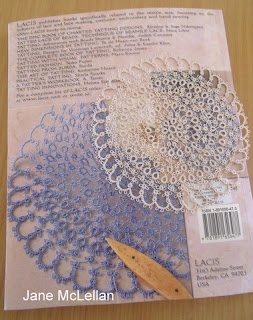 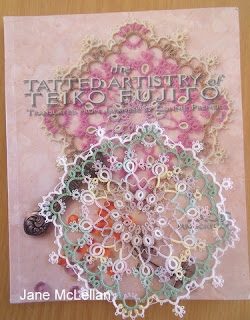 I've really enjoyed working systematically through the Tatted Artistry of Teiko Fujito, published by Lacis Publications, ISBN 4-529-03570-0. There were a number of patterns that I probably wouldn't have chosen to tat, but was glad I had. Some looked fiddly, but were worth the effort.

The book has been translated from Japanese and consists of pictures and diagrams, no text. Sometimes the photos conflicted with the diagrams - I went with the one that seemed most sensible. Sometimes I had to study the diagrams for a while to figure out how to work the motif, but hey, I tatted them all, so it's perfectly doable.

The most striking thing I learnt from the book was the importance of picot length and bare thread spaces. It stands to reason that if picots are too small the work will cup, but I hadn't realised that making picots too long would also distort the work. Thread is not as forgiving as I supposed.  Given how important picot size is to many of these patterns, it's a shame that there's no indication in the book of how long picots and bare threads should be. Trial and error can be  a tedious way of getting them right! I did like the way Teiko Fujito played with picots, not only varying picot length but using double picots and picots with rings on them. I think that's what is most distinctive about the book.
Posted by Jane McLellan at 3:51 AM