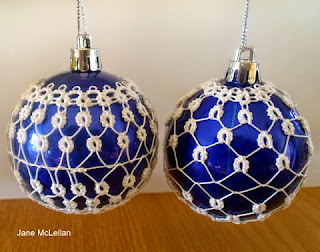 Well, making the bauble cover smaller turned out to be easier said than done. When I just reduced the number of repeats on the first row from 20 to 16, the resulting 'circle' didn't lie flat against the bauble. Hmmm. The obvious solution would be to shorten the chains, but since they're only 2-2, there wasn't much room for manoeuvre. I shortened them to 1-1, which brought the rings into a circle very quickly (PDQ as my high school Maths teacher would say). Then I did three rows of mignonette stitch rather than two. As before, I did the two ends the same and then laced them together in the middle. I'm not sure I prefer the result, but there you go.

Another solution would be to use a finer thread and the same pattern, but I want the bauble to be bold enough to show up on a Christmas tree.
Posted by Jane McLellan at 10:13 PM