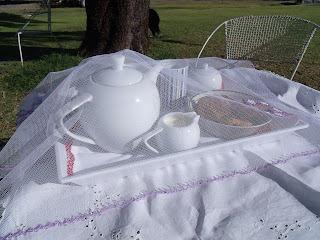 Michelle and Cindy asked me to show a food cover being used. Traditionally, it is made of net and used to cover the tea tray, to keep flies and other nasties off the cookies and out of the milk. I know it as a 'teashower', but since I can't find that word in any dictionary and it caused perplexity in Tatland, I now use the term 'food cover'.

Net is not very robust and the tatting tends to pull off it easily. The one above I made at least 25 years ago, in my previous incarnation as a tatter (I gave it  to my aunt, but I don't think she ever used it). Now I use a sheer material like organza. I often use mine to cover the fruit bowl, or salads for a cold lunch: 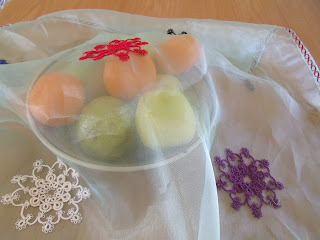 The good thing ( aside from it being a great way to show off tatting!) is that you can see the food underneath the cover.

Karen in Or asked me to show the back of the food cover, so we could see whether thread matching the fabric or matching the tatting looks better on the back. So here is the red motif, which shows both: 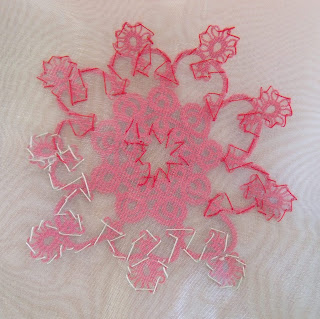 I think the thread matching the tatting looks better even on the back. Where I would probably make an exception is sewing on Victat's roses, which I sew entirely from the back, since they have no picots. But looking at this picture, I wonder if I need to experiment with that.