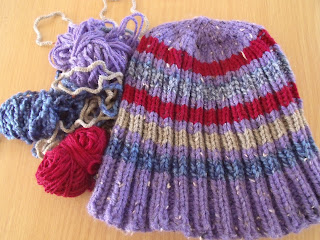 I've been feeling a bit guilty that there were still some semi-balls of yarn left in the bag my neighbour gave me to knit for her for market. So yesterday I went back to them and knitted a stripey hat. I had to double the thin yarns, which I did by winding them on my ball winder so that I could take a thread from the middle and from the outside at once. The pattern comes originally from the Ashford Book of Spinning, though I just did it from memory. I'm really done now! I'm going to see my neighbour this afternoon, so will give her all the bedsocks and hats I've knitted.
Posted by Jane McLellan at 2:19 AM