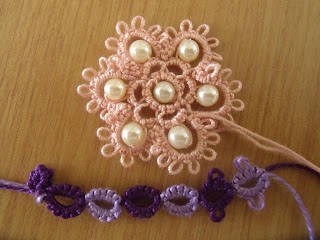 Jon put the pattern for this daisy pin on her pattern page yesterdy. It's a sweet little daisy and a quick tat, thanks Jon. I've left the threads so that I can sew it onto something. While I was about it, I thought I'd try her instructions for making a SSSR braid in two colours. It'll take a bit of practice to get the rings neat, but the technique works fine. Years ago I worked out how to do a motif in three colours by tatting with two shuttles at once, but later discovered that encapsulation achieved the same effect with much less effort!
Posted by Jane McLellan at 3:32 AM