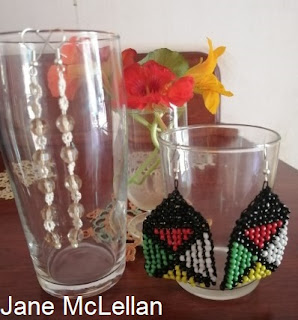 As soon as I announced I'd given up on beads, I had an enquiry about beadwork. Of course. The lady bought a key ring, but said what she was really interested in was earrings. She sent me a couple of pictures for inspiration. I used finger tatting for the very dangly pair, so that I could put the thread through the beads without removing shuttles.

The other picture was very interesting. I realised that I've been thinking about beaded earrings wrongly. I couldn't see a good way of attaching hooks to beaded crochet rope, though a tatted ring might work. But how about knitting a flat beaded piece? I started with a size 10 thread, thinking that would make the work stiff enough. My first design was a series of zigzags, which really didn't show up well. Something bolder was needed. The second attempt was a better design, but the thread showed through too much. This is the third attempt, using size 40 thread and 2mm knitting needles. I think the idea has potential.