I've done a lot of dyeing in my time, but not often dyed this much fabric in one go. I had thought I'd concertina fold the lengths, but that was unmanageable, so I folded all the curtains in four the same way, so that if the inner fabric was lighter, the light part would be at the top of all the curtains. Then I concertina folded, measuring the first fold so that they'd all be roughly the same: 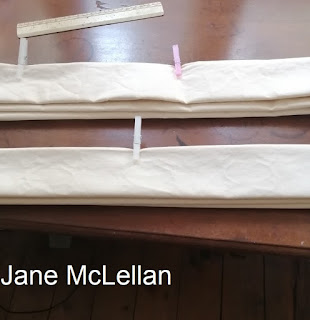 I mixed salt and bicarb in water in a bucket and put the first two in to soak: 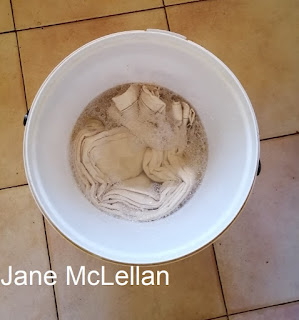 The brown in the water is sizing from the fabric. I went back to the sewing machine to finish the other two curtains, so these two soaked much longer than the second two, but it didn't seem to make much difference.

When I'd mixed the dyes, turquoise and grey, I poured them in stripes onto the fabric: 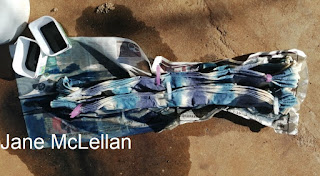 Each curtain was put into an oven bag, which protects the oven and stops them from drying out while they're in the oven: 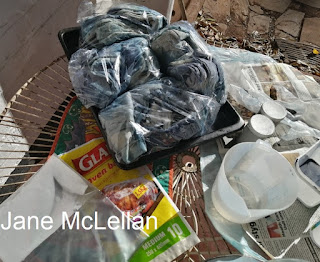 They went into a cold oven, set to 120 degrees Celsius. It took 5 minutes to reach that temperature, I left them for 15 minutes and then switched the oven off. After another 15 minutes, I took them out,  washed them in the washing machine and hung them up to dry: 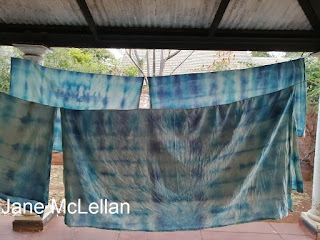 I'll have to iron them before I hang them up, which may not happen today. I'm happy with how they look! It doesn't seem as though the part that was folded inside is any lighter than the outer part.
Posted by Jane McLellan at 12:57 AM