After a lot of toing and froing we are now resettled in our own house. I've been AWOL from here because I've had no access to the internet. At last fibre has been put in and we are reconnected to the world. 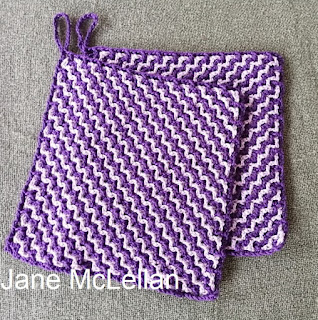 I decided I needed a pair of pot holders for my 'new' kitchen. I've made several pairs as gifts, but never made any for myself. I don't know if it's because I was working with 4-ply cotton instead of the double knit that I usually use, but the loop left at the end of each row, when swapping to the other colour, kept disappearing. I tried various strategies, such as putting the yarn ball inside the loop, and eventually hit on the best solution. Tie a slip knot in the loop: 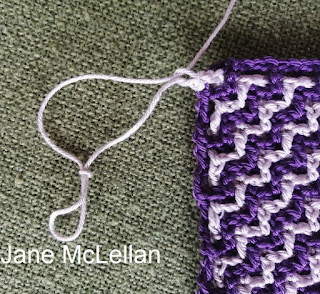 The knot prevents the work from unraveling, but when the time comes to use that colour again, one tug removes it. Problem solved.
Posted by Jane McLellan at 1:24 AM