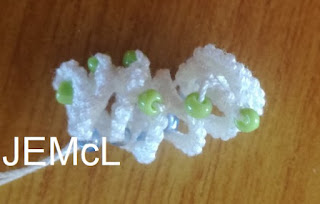 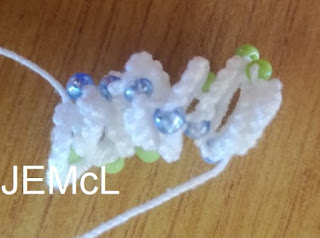 With shuttles and beads handy after yesterday's pearl tatting experiments, it was a good time to try out Ninetta's stacked rings with beads. It would take a bit of practice to get it looking good, but I think I have it. Watching Ninettta's video definitely helped.

God's Kid Sue suggested using the technique to make something similar to the crochet beaded ropes I've been making. It might be possible to do it using a technique with chains perhaps, but I think having that many beads on a shuttle would be impractical. Or am I just being feeble?
Posted by Jane McLellan at 1:36 AM