I took my samples for beret and scarf to the last craft group meeting I went to. The gurus liked the beret, but gave the hexagon scarf idea the thumbs down. They felt that it would be too 'busy'. They suggested having the flower motif just at the ends of the scarf with something plainer in between. I undid the outer row of the hexagons and reconfigured them: 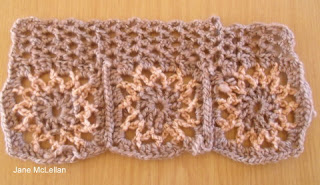 I sent a photo off to the group and they liked this, so forward I go with spinning. The spinning will take a while because I'm spinning it quite fine. Corlie also suggested that I make the contrast between the two colours greater so that the flower motif will show up better on beret and scarf. I think that's a good idea, I'll remember it when I do the dyeing. The stitch I've used for the 'plain' part of the scarf is the stitch from the first beret, which goes to show that my testing and experimenting doesn't go to waste!
Posted by Jane McLellan at 1:14 AM