I know that Pinterest is open to criticism, but I do like the way it enables me to come across 'new to me' techniques in all sorts of fields. The latest 'ooh I must try that' was pixelated crochet, or pixel crochet. It consists of small crocheted squares joined to make a picture. A kind of cross between crochet and cross stitch. As with cross stitch, you can use a lot of shades and go for a subtle effect, or go for simple and bold. Better start with simple and bold at any rate! There are some amazing pictures of blankets out there, like this one. But I'm starting with a cushion cover, simpler than this one which is also spectacular. 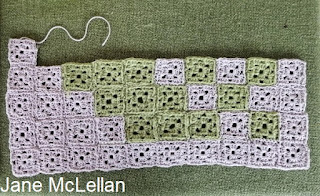 I couldn't find any instructions, so I had to experiment and learn by experience. My first square, using trebles (double crochet in American) was too large. Using a half treble (half double crochet) was better. I'm crocheting over the starting thread  and using the end thread to sew the square to the next one. That was fine on the first row, but on the second I realised there would be places where I'd be using a green thread to join two grey edges. The solution is to sew from the back to minimise the appearance of the thread. It'll take a bit more work for the picture to start to emerge.

Posted by Jane McLellan at 1:54 AM