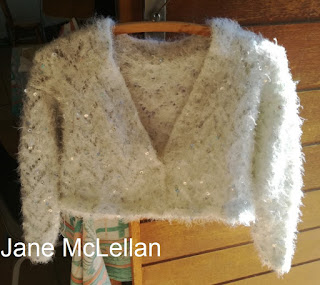 I've finished the cardigan for Isabel. The sequin yarn was a bit tricky to knit with because the needles kept poking into the sequins. But when it came to putting the cardigan together, the sequin yarn was impossible! Instead, I raided my tatting supplies and used size 20 white thread to sew the parts together. I used it to pick up stitches around the neckline too, which worked like a charm. I knitted the band in the sequin yarn and the original stitches don't show at all. I considered using it to cast the band stitches off, but I had a better idea - I removed the strand of yarn that held the sequins and used the smooth part of the yarn to cast off with, as I did for hiding ends: 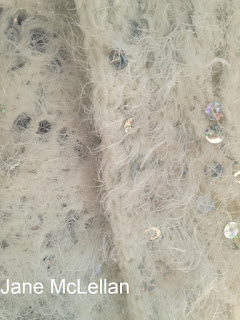 I wish I'd thought of that earlier, when I cast off the other pieces. But it was certainly more important on the band, where the cast off is not hidden by seams. Now, fingers crossed the Post Office will get the cardigan to Isabel!
Posted by Jane McLellan at 3:27 AM