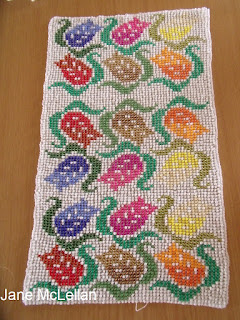 I've finished the second version of the beaded knitting tulips. Here it is alongside the first one: 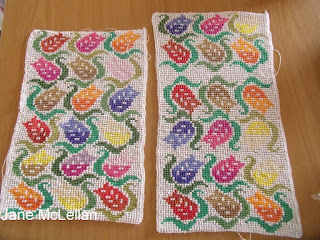 The second one, on the right, looks better not only because the tulips are the right way up, but because of the extra white rows between pairs of flower rows.

I eventually found that the most efficient way of working the beaded knitting was to thread a row of beads, following the chart, then check it by looking at it differently - check all the flower colours and then the leaf colours, say, rather than checking it beginning to end. When knitting, I'd slide the beads for one row up and knit without looking at the chart - all being well, the beads and the end of the row coincided. This 'count twice, knit once' method worked better than my original way of threading beads and then checking the chart as I knitted a row.

Statistics - the chart is from Family Album by Kaffe Fassett and Zoe Hunt; the knitting measures 22 cm by 36 cm; there are 3696 beads knitted in! I won't make the clutch bag itself until I get the right clasp.
Posted by Jane McLellan at 3:58 AM