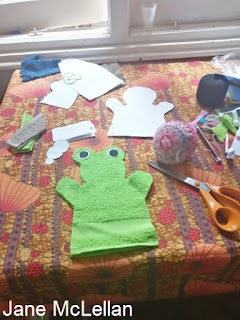 In the run up to Christmas, the bath puppets are finding homes as fast as I can make them. The orange giraffe left the same day as the pink one. I made a monkey and a crocodile as gifts. Then came Ruth's gang - monkey, crocodile, rabbit and hippo. Now I'm working on Kim's gang - frog, hippo, crocodile and rabbit. I had to go and buy more towelling yesterday.

Ruth bought four towels too, so I was pleased about that. Aside from the Star Wars towels, I don't seem to have sold a towel for a while.